Luisenplatz on Ice – HEICO supports the city's schools and kindergartens! Ice rink, light show and much more can be seen from November 25th to January 09th, 2022 on the Luisenplatz in Wiesbaden. Under the motto: LUISENPLATZ ON ICE as part of the children's shooting star market, Sporthilfe Wiesbaden e. V. managed to implement an ice skating offer for children. Thanks to HEICO's commitment, free ice skating is made possible for kindergartens and school classes. On the large ice rink, with an ice surface of around 440 square meters, the children can do their lengths - and thanks to the city's children's shooting star market, which is also taking place on Luisenplatz this year, together with their parents they can also enjoy a market that is particularly geared towards children. Children in particular, who are known to be particularly affected by the pandemic, benefit from this successful campaign, which can take place thanks to sponsors such as the HEICO Group.

"As a company, we have been based in the region for 55 years now and feel very connected to the people of the city, the location of our company headquarters," says Carsten Hinz, Managing Director of HEICO Holding GmbH. "Two years ago we moved to our new company headquarters at Abraham-Lincoln-Strasse 20 and as an employer with many employees from the region, we are very pleased to support this campaign".

On the opening day, young Wiesbaden figure skaters put on a great show before the little ones between the ages of 4 and 12 went on the ice. A nice campaign for all children in the city of Wiesbaden. A comprehensive series of photos can be found at: https://wiesbaden-leben.de/luisenplatz-on-ice-ist-eroeffnet 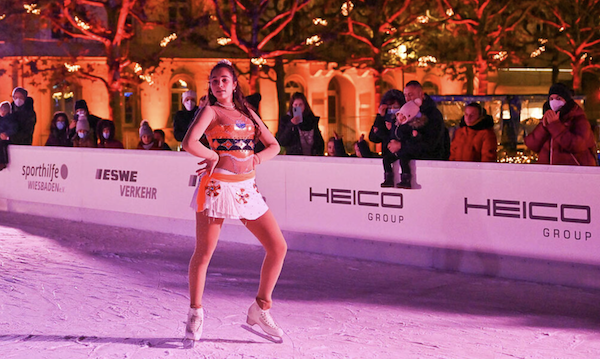